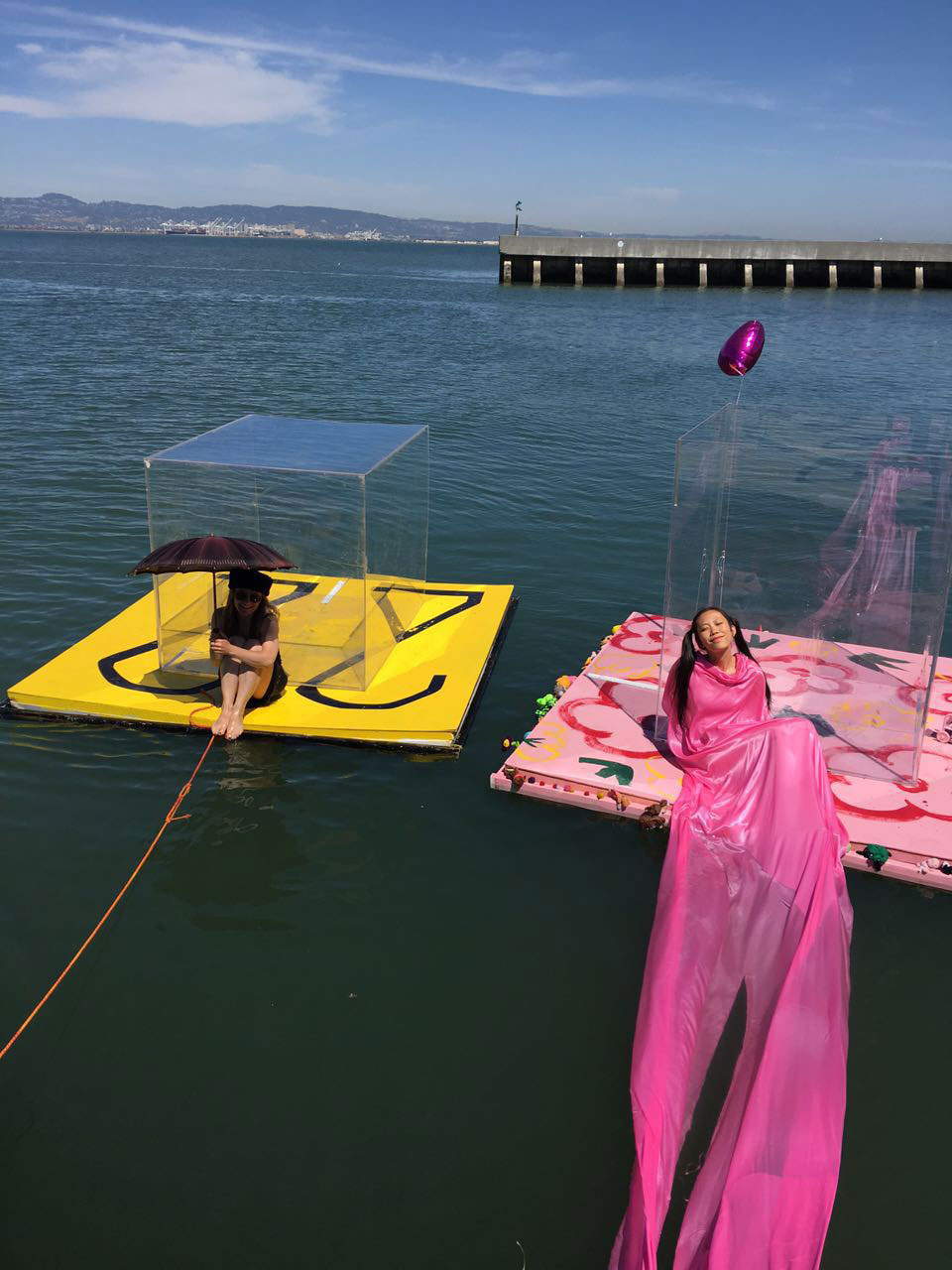 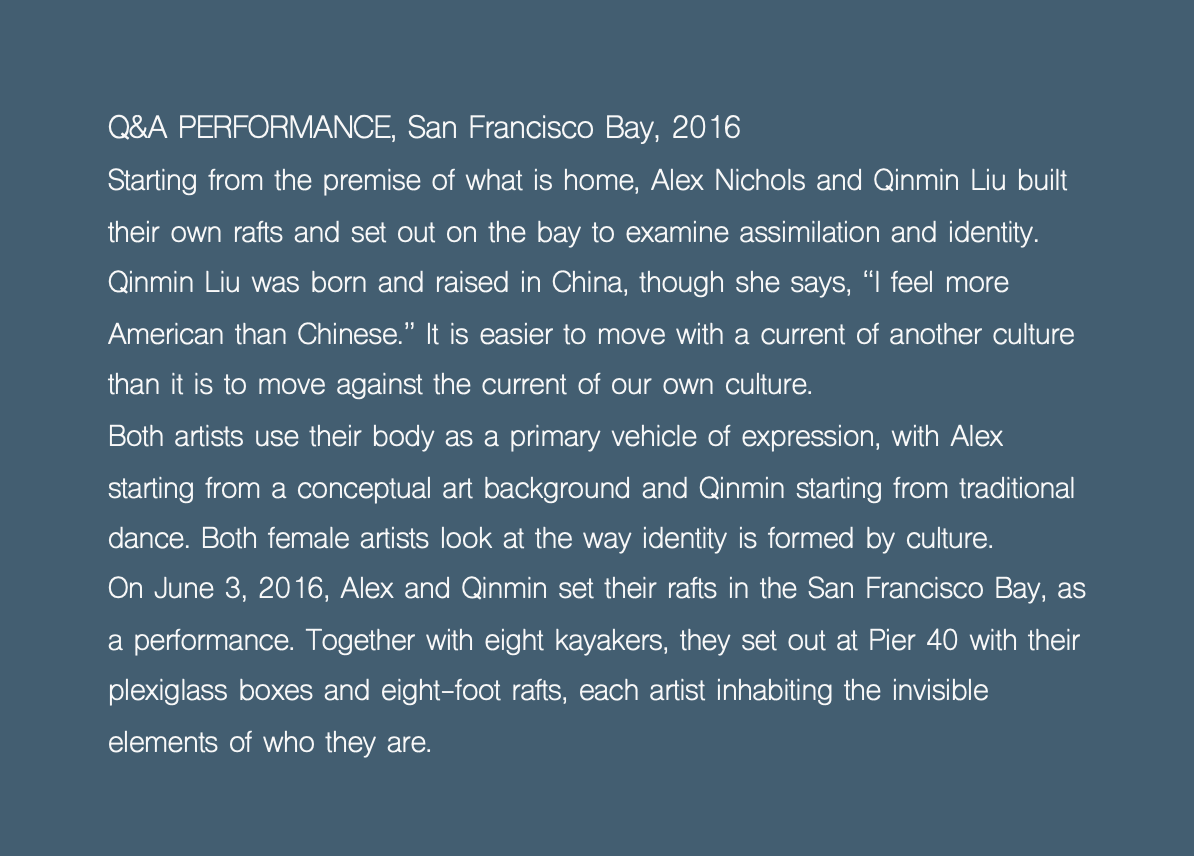 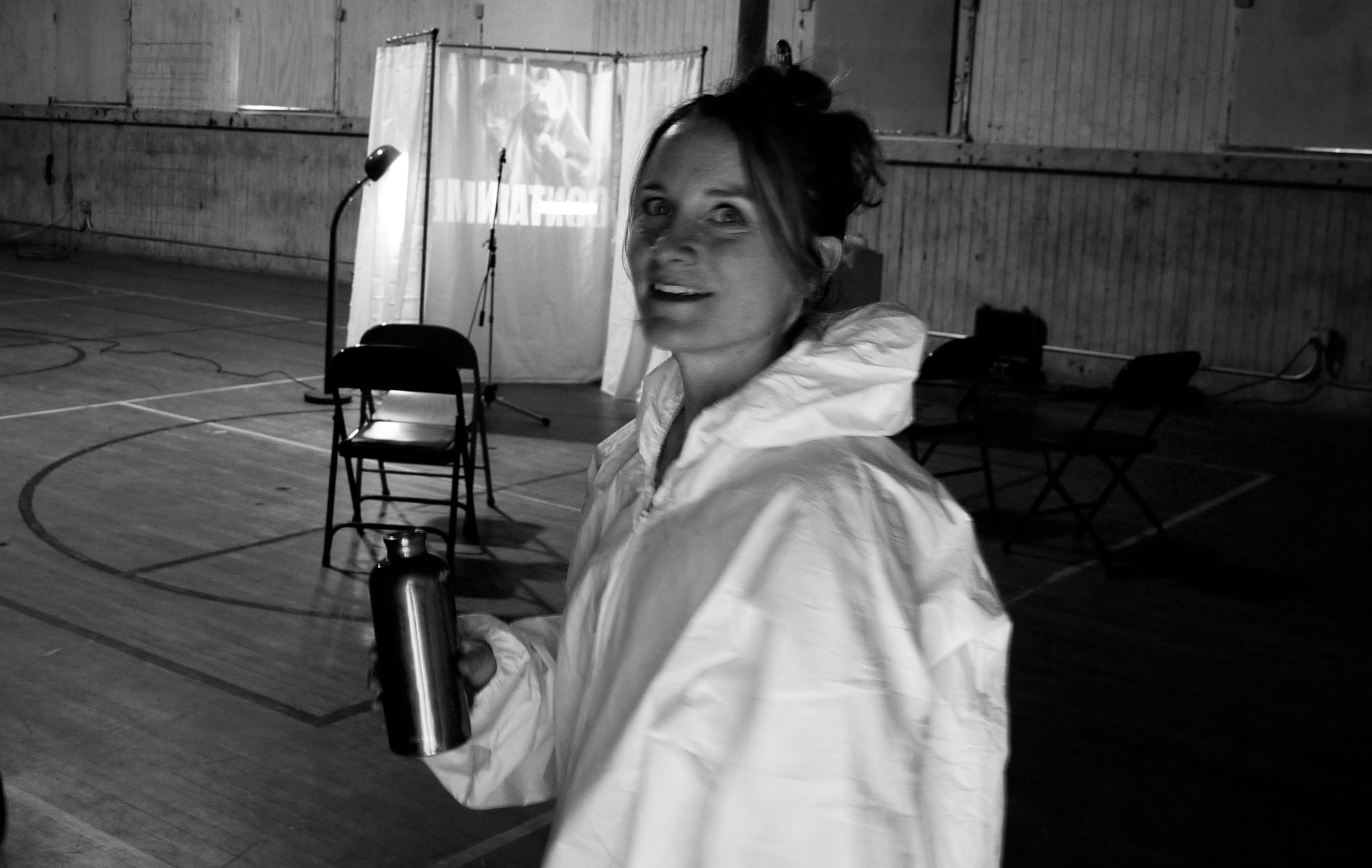 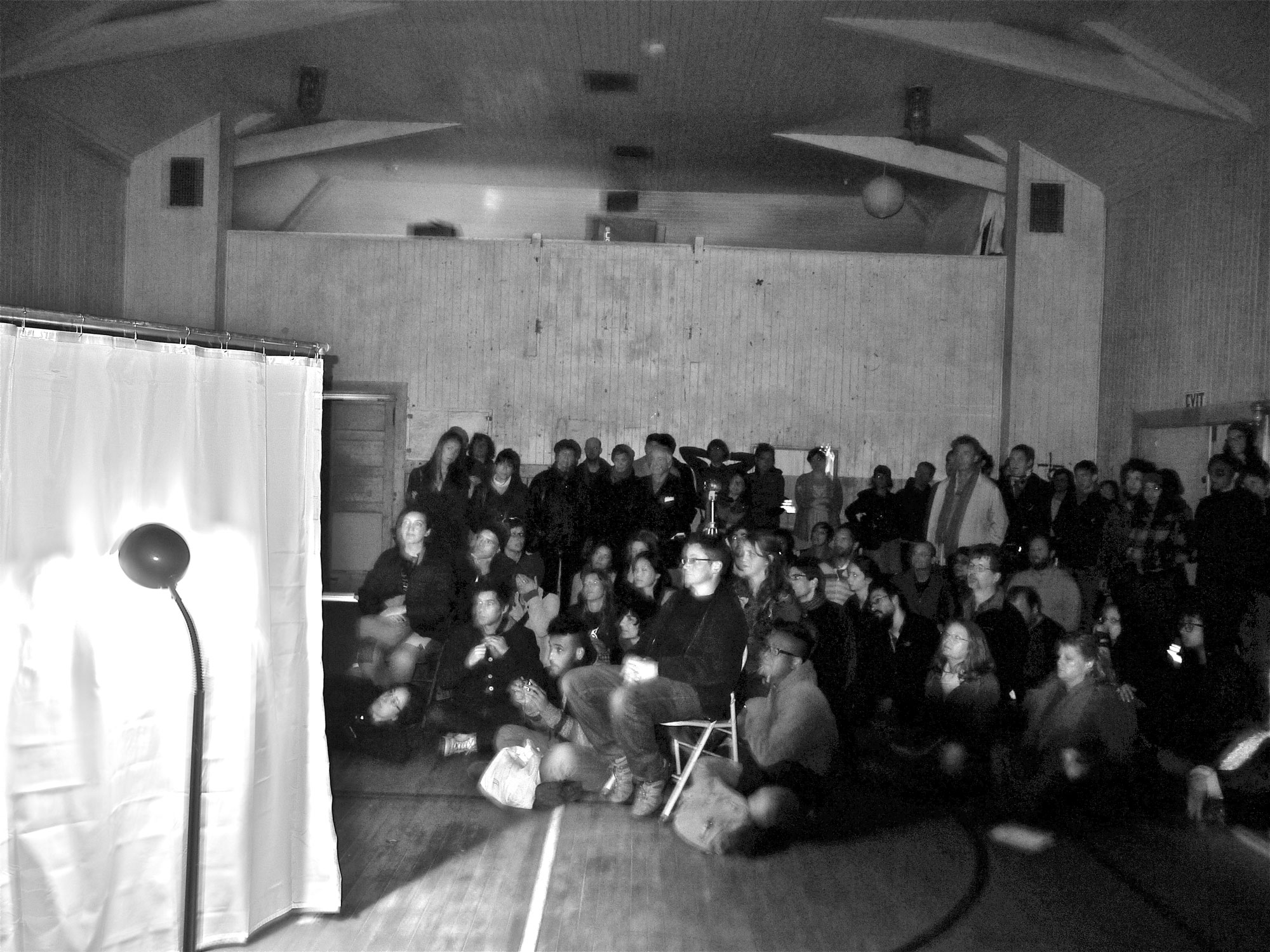 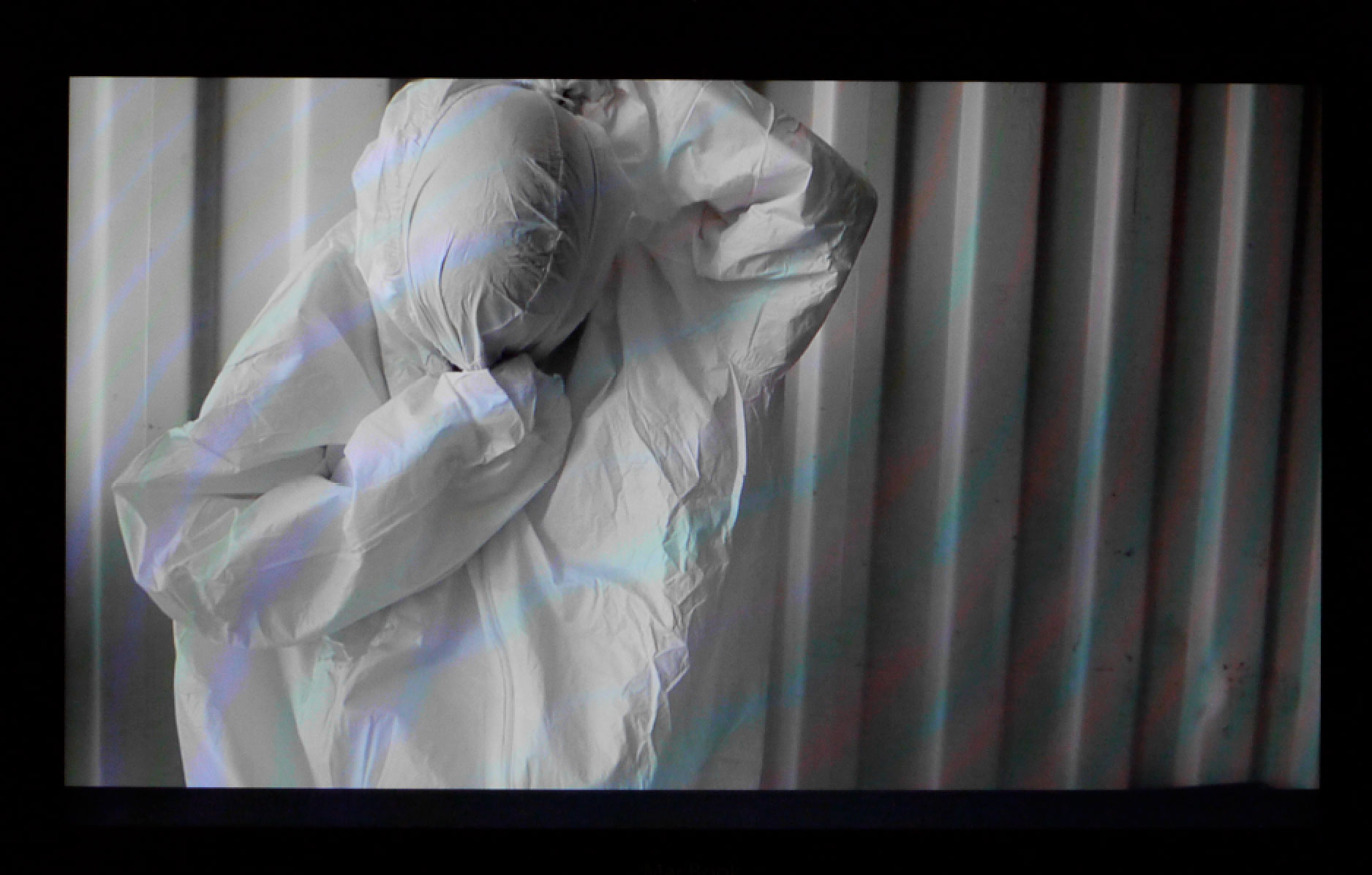 Q & A: PERFORMANCE Qinmin Liu & Alex Nichols A public performance that took place on the San Francisco Bay in 2016. Starting from the premise of what is home. Alex Nichols and Qinmin Liu build their own rafts and set out on the bay to examine assimilation and identity. Qinmin Liu is born and raised in China.“I feel more American than Chinese” she says. It is easier to move with a current of another culture than it is to move against the current of our own culture.

Both artists use their body as a primary vehicle of expression. Alex starting from a conceptual art background and Qinmin Liu starting from traditional dance. Alex Nichols is born in the US and Qinmin is born in China. Both female artist looking at the way identity is formed by culture. On June 3 2016 Alex and Qinmin set their rafts in the San Francisco bay, as a performance. Together with eight kayakers they set out at Pier 40 with their plexiglass boxes and eight foot rafts on the San Francisco Bay. Each female artist inhabiting the invisible elements of who they are.

CONTAINMENT: PERFORMANCE at Headlands Center For The Arts. Short story and performance piece. Alex Nichols looks at the decisions we make and the consequences of those decisions through the pressure of a contaminated surface that must be cleaned, the decision the protagonist makes to take the job that he knows will mean his slow death.

Headlands Center for the Arts, “Breaking Ranks” in military usage indicates the movement of a group to fall out of line, allowing each person to go his or her own way. The Bay Area artists, performers, and writers included in this annual exhibition break ranks from the status quo to investigate the arbitrary division between Nature and Culture. The diverse media in the exhibition, including drawing, painting, photography, video, painting, sculpture, and live performance reveal the products and processes of culture as part and parcel of human nature, enough to make culture at least second nature for humans everywhere.
.

Thanks for your participation!